You are here: Home > Canada
All posts from ndppei.ca

How To Apply For The NDP Of Prince Edward Island Party?

NDP PEI Statement on the future of childcare services on PEI. Prince Edward Island needs a publicly operated and managed childcare system. Families have been struggling with lack of local access, unaffordability and haphazard standards and programming in childcare services for too long. Island New Democrats want to see funding being used to better improve our system.

To Apply For The NDP Of Prince Edward Island Party follow the below steps,
Steps,
Step-1 : Go to the above link
Step-2 : Click on the link “Become a member”
Step-3 : In Become an Island New Democrat
Step-4 : Choose your payment
Step-5 : Enter your personal information
Step-6 : And click on the “Join” button 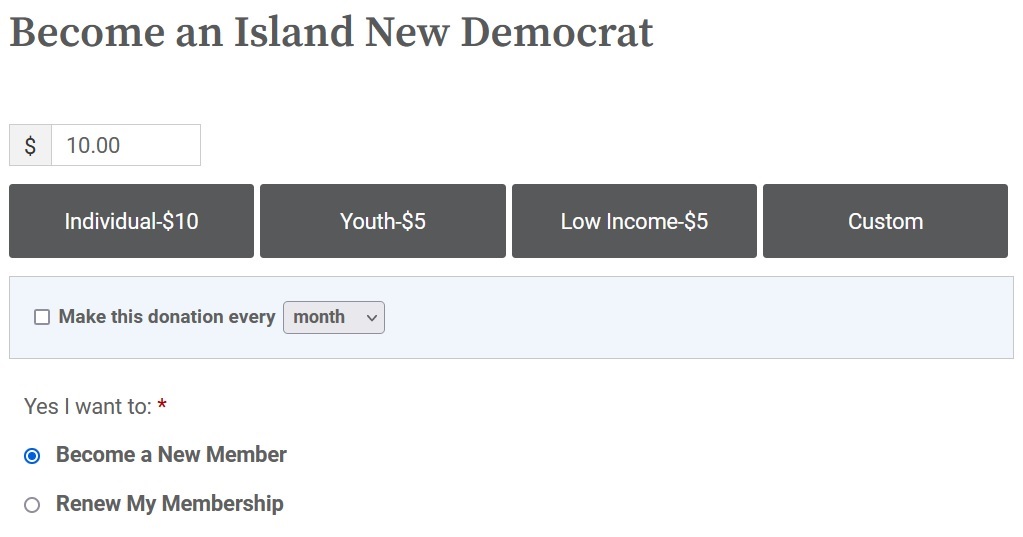 Principles of New Democratic Party of Prince Edward Island Party
** The NDP PEI follows key ideas an principles of social democracy. These can be defined as:

** Prioritize the production of goods and services to the social needs of individuals;

** Encourage social harmony to bring about the potential of citizens in both an individual and a collective basis.

** The New Democratic Party of Prince Edward Island holds firm to the belief that the dignity and freedom of the individual is a basic right that must be maintained and extended. We are proud to be associated with the democratic socialist parties of the world and to share the struggle for peace, international co-operation and the abolition of poverty.

** All applications shall be forwarded as soon as possible to the Provincial Office.

** A member in good standing of the New Democrat Youth of Prince Edward Island shall be an individual member of the party without any additional payment of fees.

** Beginning on January 1, 2017 and thereafter, individual and affiliate memberships shall be based on an annual fee due and payable on January 1 of each calendar year.

Affiliated Membership :
** Affiliated membership shall be open to trade unions, farm groups, co- operatives and other groups and organizations that, by official act, undertake to accept and abide by the constitution and principles of the party and are not associated or identified with any other political party.

** Affiliate membership fees for national groups or organizations shall be as set out in the Federal Constitution (Article 4.3).

** Affiliate membership applications for groups or organizations based in Prince Edward Island and the fees for their affiliation shall be as determined by the Provincial Council.

** The number of such Honourary Life Memberships granted in the year shall not exceed five, with every effort made to achieve equal representation of women.

** An Honourary Life Member shall be an individual member of the party without payment of fees.

** Honourary Life Membership shall entitle the holder to delegate status at any Convention of the provincial party with voice and vote.

Non-Resident Membership :
** Upon application, membership may be granted by the Provincial Executive to individuals whose primary residence lies outside of Prince Edward Island.