You are here: Home > Ireland
All posts from citizensinformation.ie

You do not need your polling card to vote. However, you do need to bring identification. Remember only Irish and British citizens who are resident in the State can vote in an Irish general election. You also need to be over 18 and registered to vote.

You should bring identification with you even if you have a polling card.

If you do not have any of the documents listed above, you can use one of the following, along with evidence of your address in the constituency:

If you are asked to prove your identity and you cannot do so, you may not be allowed to vote.

At The Polling Station

** When you arrive at the polling station, you will be asked to state your name and address and should have your identification ready for inspection.
** If the presiding officer is satisfied with your identity, and your name is on the Register of Electors, the presiding officer will stamp a ballot paper and give it to you.
** You will then go into a voting compartment. The names of the candidates in the election appear in alphabetical order on the ballot paper along with an indication of their political party, if any.
** A photograph of the candidate and/or a party emblem may also appear on the ballot paper.
** It is a secret ballot, which means that if you take selfies or post pictures online that reveal who you, or someone else, voted for, you could be prosecuted.
** Each candidate at a general election may be represented by a personation agent at the polling station. This person supervises the polling and helps prevent electoral offences.
** However, on polling day, campaigning is forbidden, and posters must not be displayed within 50 metres of a polling station.

** You must indicate the order of your choice of candidates by writing 1 in the box beside the photograph of your first choice of candidate and, if you wish, 2 beside the photograph of your second choice of candidate, 3 beside the photograph of your third choice and so on.
** This allows for your vote to be transferred from your 1st choice to your 2nd choice if your number 1 candidate has been eliminated or already elected. You can read more about how this works in our document on proportional representation.
** If you want to vote for one candidate only, you should mark the number 1 in the box next to the candidate’s name. You should not tick or mark the box with an X.
** Once you have made your choice or choices, simply fold up the ballot paper and post it into the ballot box.
** If you make a mistake on your ballot paper, the Returning Officer may give you another ballot paper. This is at the discretion of the Returning Officer.
** If you have already posted your ballot in the ballot box, the Returning Officer cannot give you another ballot paper. 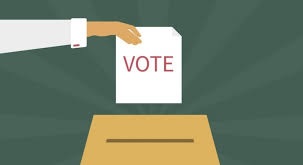 Ballot papers that cannot be counted are called spoiled votes. A ballot papers may be spoiled if:

There are several arrangements in place to enable people with disabilities to exercise their voting rights. You can:

** Vote at an alternative polling station if the local station is inaccessible
** Be helped to vote at the polling station by a companion or the presiding officer
** Vote using a ballot paper template if you have a visual impairment
** Vote by post
** Vote at a hospital, nursing home or similar institution if you live there
** At least one of these facilities is available to you if you have a physical illness or disability, a visual impairment or a reading or writing disability